Volunteers have been working for the past several years to rid Maunalua Bay of an invasive algae called Mudweed.

But what happens to that algae when it is taken out of the bay?

You may be surprised.

The latest truckload of the algae is brought to the back of Kamilo valley. Kimo Franklin of Malama Maunalua describes it as a movement from makai to mauka.

"So we're demonstrating sustainability right now here in our own community with this algae - taking it out and bringing it up here," said Franklin.

The algae is being turned into compost - and this is truly a cooperative effort.

The ocean is giving up a treasure trove of material.

"We have trial piles that we built about three months ago. This algae, this compost is just about ready to go. Not quite yet, but we want to make it available to the farmers, to the community soon," said Franklin.

These volunteers are turning the piles - something that has to be done every week or two.

"We formulated different recipes, which each of these piles incorporates in different amounts. And over the last three months, all that material that we incorporated has broken down quite nicely," said Frankin.

The compost is still in the trial stage. Small amounts have been distributed to farms and nursuries in the area, but there is an experimental patch of sweet potatoes right here on site.

"We have about five patches of sweet potatoes growing up on the mound up there, we have about three different varieties, uala, we actually planted that several months back and even have some keikis growing up there, but the compost has been used to plant that uala and the uala is doing very nicely," said Franklin.

The hope is that the compost can be utilized by farmers throughout the island. For now, the work continues to turn an invasive algae into something that can be useful--from makai to mauka.

Turn it into an aviable soil amendment to enrich farmland, fertilize crops and promote sustainability in the islands. 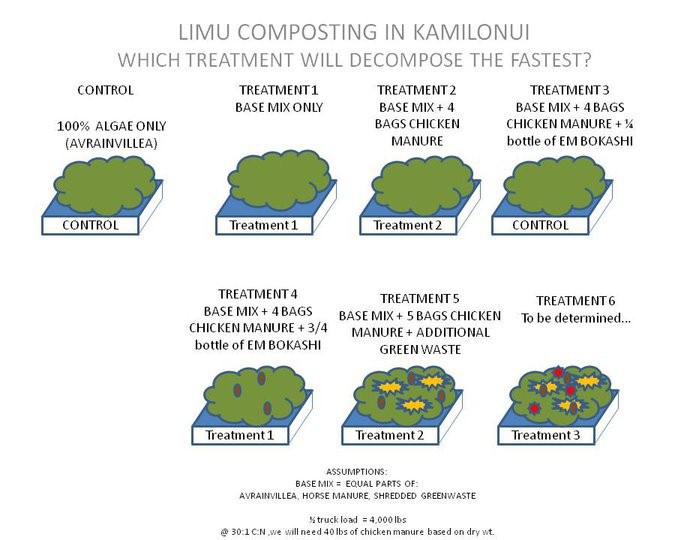